Philip John Clapp (born March 11, 1971),[1][2]known professionally by his stage name Johnny Knoxville, is an American actor, film producer, screenwriter, comedian and stunt performer. He is best known as a co-creator and star of the MTV reality stunt show Jackass, which aired for three seasons from 2000–2002. A year later, Knoxville and his co-stars returned for the first installment in the Jackass film series, with a second and third installmentbeing released in 2006 and 2010, respectively. Jackass Presents: Bad Grandpa (2013), the first film in the series with a storyline, saw him star as his Jackass character Irving Zisman. Knoxville has had acting roles in films such as Men in Black II (2002), A Dirty Shame, The Dukes of Hazzard, The Ringer, and a cameo role as a sleazy corporate president of a skateboard company in Lords of Dogtown (all 2005), The Last Stand (2013) and Skiptrace(2016). He also voiced Leonardo in Teenage Mutant Ninja Turtles (2014).

Knoxville credits a copy of Jack Kerouac's On the Road, given to him by his cousin, singer-songwriter Roger Alan Wade, with giving him the acting bug.[6][7]

After graduating from South Young High Schoolin 1989 in Knoxville, he moved to California to become an actor. In the beginning, Knoxville appeared mostly in commercials and made several minor appearances as an extra.

When the "big break" he sought eluded him, he decided to create his own opportunities by writing and pitching article ideas to various magazines. An idea to test self-defenseequipment on himself captured the interest of Jeff Tremaine's skateboarding magazine Big Brother, and the stunts were filmed and included in Big Brother's "Number Two" video.

Knoxville is responsible for many of the ideas in Jackass, and is often seen as the de factoleader of the crew. The show also stars Jeff Tremaine, Sean Cliver, Spoezy, and Dave Carniewho produced a pilot that used footage from Big Brother and Bam Margera's CKY videos.

With help from Tremaine's friend, film director Spike Jonze, they pitched a series to various networks. A deal was made with MTV and Jackass was born.[8]

Knoxville also participated in the Gumball 3000for Jackass along with co-stars Steve-O, Chris Pontius, Jackass director Jeff Tremaine, and producer Dimitry Elyashkevich. Prior to Jackasspremiering on MTV, Knoxville and company turned down an offer to perform their stunts for Saturday Night Live on a weekly basis,[9] though Knoxville later hosted a 2005 episode of the show.

Knoxville has been in several feature films, most notably starring opposite Seann William Scottin Jay Chandrasekhar's adaptation of The Dukes of Hazzard. He starred in Jackass: The Movie, Jackass Number Two, and Jackass 3D(which marked the 10th anniversary of the franchise). He played a two-headed alien in the 2002 film Men in Black II. Knoxville also worked with John Waters in A Dirty Shame in 2004, and appeared as a supporting character to The Rock in Walking Tall in the same year.

He starred in Katrina Holden Bronson's Daltry Calhoun in 2005, and in The Ringer as an office worker who pretends to be disabled and joins the Special Olympics to pay for surgery for his office's janitor. He starred in the movie Lords of Dogtown as Topper Burks, made a minor appearance in the 2000 movie Coyote Ugly, and was featured as a guest voice on two episodes of King of the Hill.

Knoxville appeared in the John Madden-directed adaptation of Elmore Leonard's novel, Killshot, however his character was subsequently removed from the final cut of the film. He guest-starred in a Season 3 episode "Prank Wars" on Viva La Bam, in which he and Ryan Dunn trashed Bam Margera's Hummerand performed other pranks. He voiced himself in an episode of Family Guy. He co-produces The Dudesons in America and the now-canceled Nitro Circus on MTV.

In 2010, Knoxville hosted a three-part online video for Palladium Boots titled Detroit Lives. The videos focus on the resurgence of creativity in Detroit. Knoxville guest starred as the voice of Johnny Krill, an extreme sports enthusiast, in "Extreme Spots", a 2012 episode of SpongeBob SquarePants. Knoxville voiced Leonardo in the 2014 film, Teenage Mutant Ninja Turtles[10] but did not appear in the sequel.[11]

Knoxville has a production company called Dickhouse Productions, which he owns and operates with Jeff Tremaine and Spike Jonze of the Jackass franchise.[12] Dickhouse's projects include The Birth of Big Air (2010), a documentary about Mat Hoffman that was part of ESPN's 30 for 30 series, and  The Wild and Wonderful Whites of West Virginia (2010), both of which have been picked up by Tribeca Films.[13]

In May 2014, Knoxville (along with JackassExecutive Producer/H.M.F.I.C. Derek Freda) formally announced the formation of a new production company called 'Hello Junior', which will continue Knoxville's now-longstanding relationship with Paramount Pictures, who have signed an exclusive two-year first-look deal with Knoxville and 'Hello Junior' in the wake of the massive success of Bad Grandpa in late 2013.

Knoxville was quoted as saying, "I am over the damn moon about continuing an amazing partnership with Paramount Pictures," he said. "I have many more films to make and bones to break. I am glad I will be doing it for Paramount."[14]

Knoxville married Melanie Lynn Cates on May 15, 1995. They have a daughter, Madison (born 1996).[15] His daughter can be heard in the credits for Jackass Number Two, is seen in "The Making of Jackass Two" on the special features on the DVD, and was seen in the credits of Jackass 3D, punching Tremaine with a boxing glove. After eleven years of marriage, the couple separated in July 2006. Knoxville filed for divorce on July 3, 2007.[15] The marriage was legally ended in March 2008,[16] with final divorce arrangements settled in July 2009.[17]

On January 15, 2009, at the Los Angeles International Airport security workers discovered an inert grenade in his carry-on; he was detained and was cited for carrying a prohibited item into the airport.[22] He was released following the investigation when it was determined that the item was a prop from a commercial, and that an assistant had packed his bag for him.[22]

On February 4, 2009, Knoxville explained on The Howard Stern Show how he tore his urethra during a stunt for Nitro Circus explaining how he had to flush it twice daily. He said this was done by "sticking a tube into his penis all the way up to his bladder", referring to the practice of urinary catheterization. Knoxville said the process prevented scar tissue from forming[23] and performed the procedure "twice a day for three and a half years" after the injury.[24] 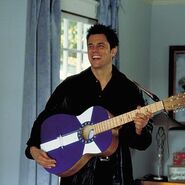 Dick Rasmusson in Life Without Dick

Topper Burks in Lords of Dogtown