Sony Pictures Entertaiment Wiki
Register
Don't have an account?
Sign In
Advertisement
in: Men in Black, Characters, Agents,
and 6 more

View source
watch 01:36
We're Getting Mutants in the MCU - The Loop
Do you like this video?
Play Sound

Laurel Weaver (aka Agent L or Elle) is a character from the comic/movie Men in Black, and one of the newer recruits like Agent J, unlike J though, L adapts to the emotional demands of her new station as an M.I.B. agent much more naturally though still has certain issues with protocol and ethics.

Laurel Weaver is a resourceful scientist who helps Agent K and Agent J. She is fascinated by anything scientific, particularly when two aliens disguised as humans are brought to the morgue.

Role in the film

Laurel first appears at the NYPD station and talks with James Edwards about the fugitive he chased down, and invites him to come to the morgue to look at the fugitive's mangled body. However, she is neuralyzed by Agent K on the way out. 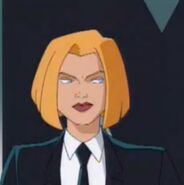