Samuel Bryce ("Sam") Lerner is an American actor best known for his role as Geoff Schwartz on The Goldbergs, Chowder in Monster House, and his role as Quinn Goldberg in the Michael Bay produced time travel thriller Project Almanac.

Sam Lerner was born in Riverside, California, the son of Patti (née Klein), a reporter, and Ken Lerner, an actor. His uncle is actor Michael Lerner.

Sam Lerner appeared in the feature film Envy, as the son of Ben Stiller and Rachel Weisz's characters, and played the son of Wendy Malick and Sam Robards's characters in the ABC-TV pilot My Life With Men, and the son of John Leguizamo and Claire Forlani's characters in an untitled Brett Ratner-directed pilot for CBS-TV. Lerner voiced one of the leads, Chowder, in the computer-animated film Monster House (2006). He was nominated for the 2006 Annie Award for Best Voice Acting in an Animated Feature for his role, and was beaten for the award by Sir Ian McKellen. On October 16, 2017, Lerner was cast in the Blumhouse supernatural thriller film Truth or Dare. The film was released in theaters on April 13, 2018.

Lerner has been in a relationship with Smosh member Olivia Sui since 2018.

Geoff Schwartz
The Goldbergs
Add a photo to this gallery 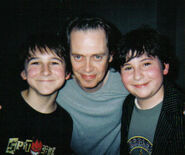 Add a photo to this gallery
Retrieved from "https://sony.fandom.com/wiki/Sam_Lerner?oldid=23333"
Community content is available under CC-BY-SA unless otherwise noted.